Skip the trial and error process! You need your health back. Naturally. Empower your mind and body today just contact us and see how powerful you are!
We attached your ebook. Thank you so much, Dr. Jack Kunkel

The Truth about Fish and Fish Oil 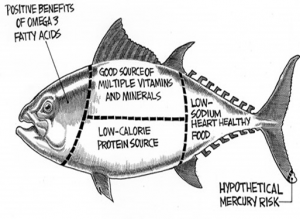 More recently, Fox news exploited an apparent correlation between increased levels of plasma omega-3 fatty acid and an amplified risk of prostate cancer. Then why is there an ample amount of benefits proven time and time again from the use of this anti-inflammatory omega-3 fatty acid? It is important to understand the truth about fish and fish oil before removing it from your diet.

The standard American diet (SAD) provides a greater amount of inflammatory fatty acids omega-6 than anti-inflammatory omega-3 fatty acids. So great in fact, SAD produces an imbalanced ratio of 15:1-17:1, omega-6 to omega-3.1 Although our body needs some omega-6 fatty acid, too much of it causes inflammation which makes us sick! We can avoid that by consuming a balanced quantity of the two. Read on to understand why eliminating omega-3 fatty acids may not be in your best interest!

Omega-3 fatty acids are considered essential because our body cannot produce them on its own, so we must consume them through our daily diet. Omega-3’s are known to support proper brain function, growth and development.2 In addition, these fatty acids will help keep inflammation to a minimum as well as help reduce one’s risk in diagnosis of chronic illness’ such as heart disease, cancer and arthritis.2 But perhaps the most important reason so many people stress the consumption of omega-3’s into our diet is its ability to lower high blood pressure, known as “The Silent Killer.” Clinical studies2 find that when taking 3 grams of fish oil supplement regularly, patients with untreated hypertension’s blood pressure may decrease.

After watching the Fox news report, Dr. Robert Rountree3 (chief medical officer at Thorne Research, Inc) reputed that this study should not cause caution because numerous studies support the benefits of omega-3’s!

Rountree noted that studying several blood tests analyzing omega-3 levels would have been appropriate; instead only a single blood test was conducted without any analysis of what the subjects had been consuming. Finally, there are many risk factors the subjects were partaking in that the researchers may have not taken into consideration before accusing the omega-3’s. These included:

We live in a pro-inflammatory environment causing diseases; and omega-3’s are a necessary defense. Therefore, not only should we still consume omega-3’s, but also cut down on our omega-6 fatty acid intake. Help yourself by contacting your physician if you are at risk of developing prostate cancer.

Here’s a link to the fox news report:

As you may be aware, an article published in the July 2013 issue of the Journal of the National Cancer Institute suggests there is an association between elevated plasma omega-3 fatty acid levels and a heightened risk of prostate cancer.

This study must be interpreted with a significant degree of caution for a variety of reasons:

Summary:  Given the inconsistent data attributable to omega-3 fatty acids and prostate cancer, and acknowledging the broad range of health benefits that are almost universally accorded to omega-3 fatty acid consumption, it would be premature to stop eating fish or to discontinue taking omega-3 nutritional supplements on the basis of this study.