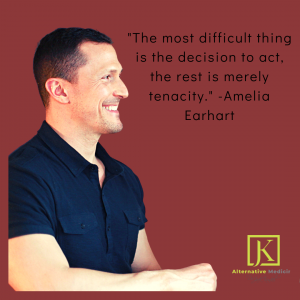 Another big reason why your metabolic rate could be damaged is the type of food that you eat. We could have all guessed this by now but have no idea why. When someone eats a large amount of simple, refined carbohydrates like soda, candy, energy drinks, and other sugar-filled foods, this confuses your body to regulate your blood sugar level.

After you flood your body with sugar by eating this garbage food, your body uses a natural defense to protect itself against high amounts of sugar by releasing a large amount of insulin into the bloodstream. These high insulin levels down-regulate your metabolism so much that you won’t even have a chance to burn fat for energy. If you choose these foods often, the chronically high insulin levels in your bloodstream will not allow your body to use its own fat for energy.

If you are constantly abusing the system like most, you will always have insulin floating around in your bloodstream – even in between meals. And in between meals is one of the most important times to fight the urge to eat because that’s when you want your insulin levels low, not elevated.

When insulin levels are chronically high, your fat-burning hormones, like glucagon, will not be able to do their job, which is to use that body fat for energy. This is known as hyperinsulinemia or insulin resistance.

It’s my worst nightmare if a patient is trying to lose body fat. If you cannot take care of insulin resistance first, you will not lose fat. Period! But don’t worry – insulin resistance can be taken care of by exercising, changing your diet, and practicing my wellness tips!

To give you a mental picture of what occurs when insulin resistance happens, here is my Insulin Resistance Chart: 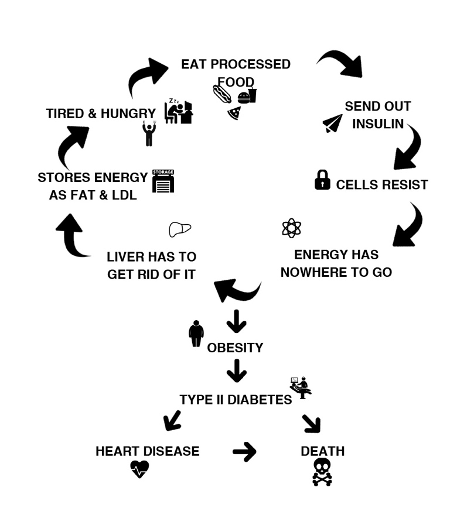 Eating Too Much But Still Starving?

Having these high amounts of insulin in your system will cause your body to feel that it needs to overeat because your cells still think they are hungry since they are starved of good nutrients. Insulin works like a key and lock - the key is insulin, and the lock is the receptors in your cells. When you have insulin resistance, the key no longer fits in the lock. No matter how long you scramble to get that key in, like in all those classic horror scenes, in this case, the monster will catch you.

Following this idea, the energy has no way to get into your cells. It floats around in your bloodstream until your body stores that energy as fat or makes it into bad cholesterol (LDL) to be used at a later date. And after that, low energy follows. The worst part is that when this constantly happens, you aren’t ever using that fat for fuel “later,” but just adding to those reserves for no reason.

You have to fight the urge to keep reaching for processed foods and foods full of sugar so that you can repair your metabolism. You have to treat your body like a temple and only allow the highest quality foods to enter. When I suspect insulin resistance in my patients, I have the patient concentrate on eating high amounts of fiber, healthy fats, and proteins.

Furthermore, exercising and moving more works like insulin by activating your energy receptors, called GLUT4, which allows food energy to be absorbed and used by your cells!

The bottom line is that if your metabolism is damaged and you don’t repair it, fat loss will be much harder to attain. As an example, can you drive a car with a gunked-up engine? Of course not! Our passion, experience, and advanced treatments help you achieve your dreams. Check out https://www.jackkunkel.com/medicine and Skip the trial and error process!