Skip the trial and error process! You need your health back. Naturally. Empower your mind and body today just contact us and see how powerful you are!
We attached your ebook. Thank you so much, Dr. Jack Kunkel 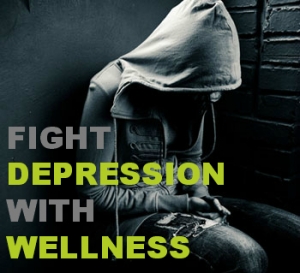 In lieu of the recent event in which actor Robin Williams took his own life while suffering from depression, we thought that we should take the time to educate people on this horrific disorder. Also, we would like to let people know that there are more options than the typical pharmaceutical solution that medical professionals suggest. This is a disorder than can be fought through practicing a healthy lifestyle, and there are facts to prove it!

Depression – severe despondency and dejection typically felt over a period of time and accompanied by feelings of hopelessness and inadequacy.

The Centers for Disease Control and Prevention surveys indicate that nearly 1 in 10 residents of the United States who are 18 years old or older have a depressive disorder[1]. Depression is a disorder that stems from significant emotional, social, and environmental factors such as a loss of a family member, loved one, or professional disappointment. These are a few of the more obvious causes of depression, but what most people don’t know is that there is much, much more that could be causing an individual to feel this way.

What people don’t understand is that depression is not something that can just be wiped away, nor does telling individuals with a depressive disorder to “just smile,” helping them. It is something that takes time and specific lifestyle changes to treat. The biochemical impact of depression will affect essential hormones in the body that cause you to feel happiness. One of the major side effects of depression is a decrease in the essential hormone called serotonin, also known as “the happy hormone.” Serotonin is sent to your brain in order to make you feel happiness, but if your serotonin levels are dramatically decreased, you will then in turn feel the depressive effects.

What you consume on a daily basis could be an immediate trigger of the depressive side effects. Multiple studies have suggested that there is a correlation between high sugar intake and depressive disorders[2]. The amounts of processed, sugar-filled foods that are stocking the shelves in your local grocery store are not only affecting our bodies, but they’re also affecting our minds! People consuming a Western-style diet like fried, refined, and processed foods have been shown to have an increased potential of depression.

Now, you are probably wondering “How can foods be affecting my mind?” Well, that’s a great question! The good news is that we have the answer. Dr. Mark Hyman explained that there are over 400,000 scientific studies linking inflammation to almost every disease known to man including depression. The ironic part of this is that fried, refined, and processed foods have a direct correlation with chronic inflammation. This chronic inflammation causes your body to wear itself down by decreasing the amount of essential hormones that it usually needs to properly function.

An overdose of regular caffeine intake has also been shown to be associated with depression (750mg daily)[3]. This is due to the fact that this constant caffeine intake activates your adrenal glands throughout the day. Your adrenal glands were originally meant to provide you with that extra energy when you need it, not all day long. Since they weren’t designed to be activated all day, they stop functioning properly causing a disorder called adrenal fatigue. This lack of adrenaline will cause your mind to decrease that essential “happy hormone” called serotonin.

WHAT CAN WE DO TO FIGHT BACK?

The greatest news is that there are multiple ways that you can fight depression with, by just changing little lifestyle habits that you perform each day. Finally, no more medicine prescriptions! Instead, we are going to prescribe you a daily dose of exercise and healthy nutrition including lean protein, fresh vegetables, and healthy fats! Sounds unrealistic, right? Well it’s not!

Remember that study we talked about earlier stating that Western-style diets have an increased potential for depression? Take this fact to the bank, or grocery store for that matter. A large cross-sectional study of women consuming vegetables, fruit, and fish in Australia found a 35% reduced likelihood of major depression[4]. Still don’t believe us? Well, individuals who have been exposed to a Mediterranean diet such as foods with high amounts of omega-3 fatty acids (fish), mono-unsaturated fatty acids (cold-pressed olive oil), and vitamin-rich foods (beans, fruit, nuts, vegetables) have been shown a significant reduction in their risk of depression[5].

Food isn’t the only therapy that you can use in order to help with this disorder though. We talked about prescribing a daily dose of exercise. This is because regularly performed exercise is a great way to suppress the depressive feelings that may be going on in your mind. The reason being that when you exercise, you are not only letting out stress by decreasing the amount of cortisol (the stress hormone) being released into your body, but it is also increasing the amount of serotonin being released, and activating your mitochondria to work, which leads to a decrease in free-radicals (damaging atoms) in your body for hours after a workout. This has been shown in both aerobic (jogging, swimming, and biking) and anaerobic (weight lifting, sprinting, and jumping) exercises, so there is a good chance that some type of physical activity will be appealing to you whether it’s swimming, biking, running, weight lifting, hiking, or something else!

This just goes to show you that a change in your physical and nutritional habits can go a long way in reducing depression symptoms. This is all meant to HELP people with depression disorders. We know that there are very extreme cases that should be closely monitored by health care professionals, but helping a little is more than doing nothing at all.

This post goes out to anyone who is suffering from a depression disorder. Also, to all of those who have lost their lives due to depression. We hope that this can make a difference in all of the lives of the people who need it.