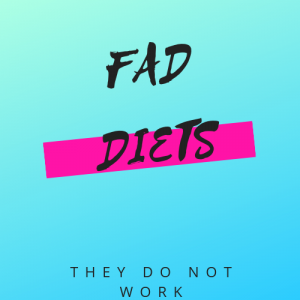 Many dieters have succumbed to the world of fad dieting. Commonly, fad dieters are provided with no education and biased information, which ultimately results in a damaged metabolism.

When you turn on the TV in the morning and scroll through the channels, you can see that many people are hopping on the fad diet bandwagon, which results in a vicious circle of diet after diet, commonly referred to as “yo-yo dieting.” There’s “The Fix,” “Lose Weight by Eating 500 Calories” and the “Don’t Eat Anything But Our Shakes” diets bombarding our brains.

The worst part about most of these diets is that they can actually put you further behind than when you first started! When you are going on one of these fad diets, your metabolism will shut down because your body doesn’t know that you are starving it on purpose. A high metabolism will burn body fat and use up energy, but since your body thinks it’s being starved, it will try to use up the driving force of your metabolism, which is your muscle. Since your body is trying to slow its metabolism down, it will use muscle as an energy source instead of fat and glycogen (stored carbohydrates in the muscle and liver). Muscle is an insufficient energy source for your body, which can cause many more problems down the road. Your muscle has a lot of not-so-efficient amino acids that your body is using, leaving you nutrient deficient and, eventually, making you more toxic than you were in the first place. Muscle’s made up of about 75% water, so when someone goes on a crash fad diet and loses 30lbs in the first 30 days, it’s a mixture of muscle, water and not nearly as much fat as they would like.

These diets are not only providing you with no education and giving you temporary results, but they are also HURTING your body by damaging your metabolism. Instead of losing just straight body fat, you are going to be losing little body fat, a lot of muscle and a bunch of water. This is why results are so temporary, because these drastic losses lead your body to recover by storing fat as a safety mechanism.

*Water makes up more than half our bodyweight; every single cell depends on it, and your metabolism will decrease without it!

THE MAGIC PILL: IF THERE WERE ONE, WE WOULD ALL TAKE IT

So, why are we still falling into the trap? Well, it’s definitely hard to pass up a “magic pill” that sheds weight, but not necessarily fat, without having to change your lifestyle. The reality is that you AREN’T becoming healthier by taking these pills. If it sounds like it’s a scam, then in all likelihood, it probably is. Just as Rome wasn’t built in a day, neither will your dream body. Instead, by giving your body a healthy foundation, month by month, you ARE going to get better. So sticking to your guns and putting in the hard work NOW will lead to lifetime results little by little. Make sure to change the way that you THINK. In a year from now, you could have lost tons of body fat, gained a bunch of lean muscle, and all by doing it the RIGHT way.